Whew. The last couple weeks have been a whirlwind. I am so, so behind with the blog, and I can't believe I let September 16th come and go without posting quickly afterwards. I'll explain what has been keeping me busy later on. For now, I'll concentrate on the events of the 16th (and the 15th, for that matter).

If you've been here before, you probably know that September 16th marked one year since Cole left this earth. We are nearly 2 weeks past that date now, and it still seems impossible that Cole has been gone for that long. As the day got closer and closer, I felt anxious. I was concerned I was going to be an emotional wreck that day. After all, September was already proving to be an emotionally difficult month.

It just so happened that on the 15th, there was going to be a picnic for Wings families. Wings is a pediatric supportive care program out of St. Louis Children's Hospital. Cole had spent 5 weeks in the NICU at Children's before he came home. Nurses from Wings visited our home once or twice a week to check on Cole. I could call them whenever I needed to, even in the middle of the night. One of the nurses spent about 4 hours at our home the day Cole suddenly got sick and then had to return to Children's for a week before he died. Wings has a social worker who has come out to see me a few times since Cole died. We didn't have to pay for any of these services. Wings is wonderful and will always have a place in our hearts. But this picnic was going to be the same weekend as Cole's death anniversary, and Eric and I feared it would all be too much. I really wanted to see the Wings staff, though, so we decided to attend.

We reminisced with the nurses about Cole and the joy of having him at home. I laughed a whole lot, and that was great.These ladies loved our Cole-man so much, and I am incredibly thankful that they are now part of our lives.This picnic may have actually come at just the right time.

At the end of the picnic, we all released butterflies. I had envisioned a perfect photo-op with a sky full of butterflies, but that didn't happen. Instead, many of the butterflies flew out of their little envelopes and hung out on the ground for awhile. The weather was cool that day, so not the best conditions for butterflies, but it allowed us to really look at them and admire their beauty.
﻿ 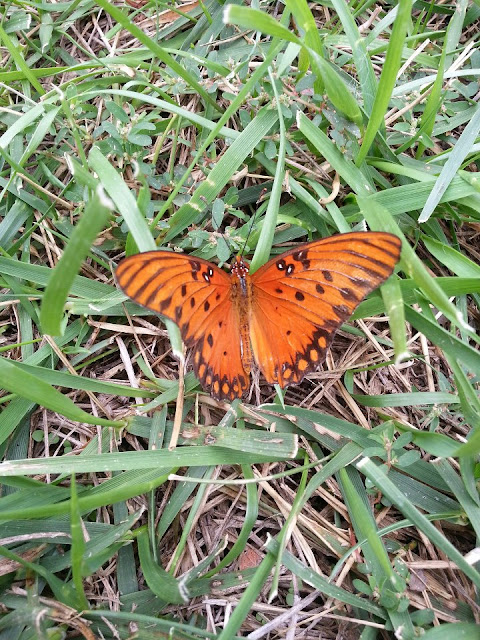 Sunday the 16th arrived. As I look back on it, I think I felt the way I did the day of Cole's funeral. I was a bit numb and not overly emotional. Grief is strange sometimes. I guess I was just focused on and really looking forward to celebrating Cole. My parents and Eric's parents are our only family members in town except for my grandmother, who is pretty much confined to a nursing home. We had planned to all be together that day. The first stop on our celebration "tour" was a visit to the cemetery. I have mentioned before how much I love where Cole is laid to rest. It's a quiet, peaceful place surrounded by trees, and sometimes we may even see a deer or two. Thankfully, the cemetery is only about 15 minutes from home. We talked to Cole, his pinwheel spun, we gave him some fall decor, and we all sang "Jesus Loves Me". 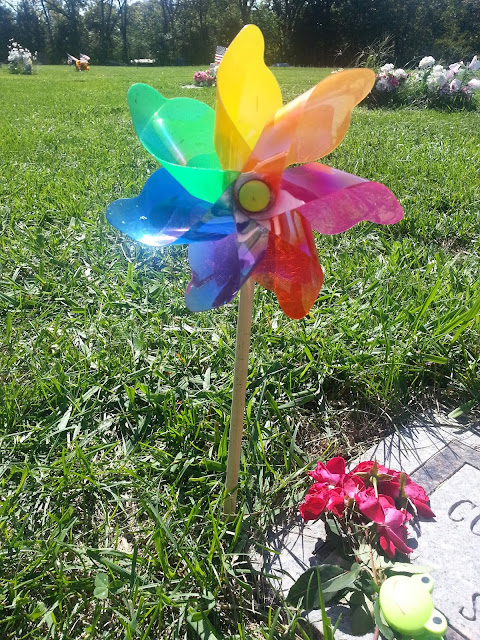 Next we headed to a lovely park in our town for a picnic. The park has special meaning for us because it has a tree that is planted in Cole's memory. Last year when Eric and I returned home after Cole's visitation, we sat down to read through some of the cards we received. One was from several of our neighbors letting us know they had all gone in together to have the tree planted. We were stunned. A few of these neighbors didn't really know us well at all, yet they gave us this sweet, very generous gift. We didn't even know where that park was and had to find it on a map. I love that park now. I love that Cole's tree is there for others to see and enjoy.

After our picnic, we all headed back to our neighborhood for the main event. Last year, Eric's parents purchased a Chinese paper lantern that we launched the night of Cole's funeral. It was incredibly moving, and we decided to make it an annual tradition. Eric's parents live up on a hill, so we knew it would be a good launching site. We wrote messages to Cole, and sent the lantern up into the sky, which still had just a hint of blue in it. Just like last year, this new tradition was beautiful and moving. One of my neighbors texted me just minutes after we launched the lantern to let me know she and her daughters had seen it, and they talked about Cole as they watched. I was really touched. 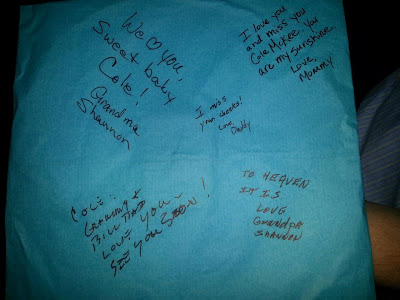 Here's the video of the lantern launch:﻿

September 16th has come and gone, and we got through it. I thank God for granting us the strength to do so. What a joy it was to celebrate our sweet boy's life in such memorable ways.

On a side note, I had a dream about Cole two nights ago. Sometimes I go to bed at night, and I pray that Cole will appear in a dream. I think I've only had one other dream about him since he left us, and I couldn't remember much about it. But my dream the other night was pretty vivid, although the scenario was weird and unclear. Anyway, in this dream, Cole was perfect. The baby didn't look exactly like Cole, but I was calling him Cole. He was smiling, giggling, and running, and I was telling people, "Look at Cole!﻿ Look at what he can do!". I woke up with a twinge of disappointment that it was only a dream, but I was immediately struck with the thought that maybe the dream was just a glimpse of what Cole's life is like in Heaven. It's perfect, and he is perfect.

What does newsighted mean?

Jennifer
I am the mother of a beautiful baby boy who went to Heaven in September, 2011 at 4 1/2 months of age. Here I will share my struggles with grief, the blessings I receive, and the Hope I cling to. More importantly, I will celebrate Cole and the impact he continues to make in the world.